Please read this manual and follow its instructions carefully. To emphasize special information, the symbol ⚠and the words WARNING, CAUTION, NOTICE and NOTE have special meanings. Pay special attention to the messages highlighted by these signal words.

WARNING - Indicates a potential hazard that could result in death or serious injury.

CAUTION - Indicates a potential hazard that could result in boat or equipment damage.

On the other end of the scale is a large network bus. A network bus allows users to expand the network by adding multiple digital gauges, GPS and sonar display units, temperature sensors and water speed sensors as well as other NMEA 2000 devices. 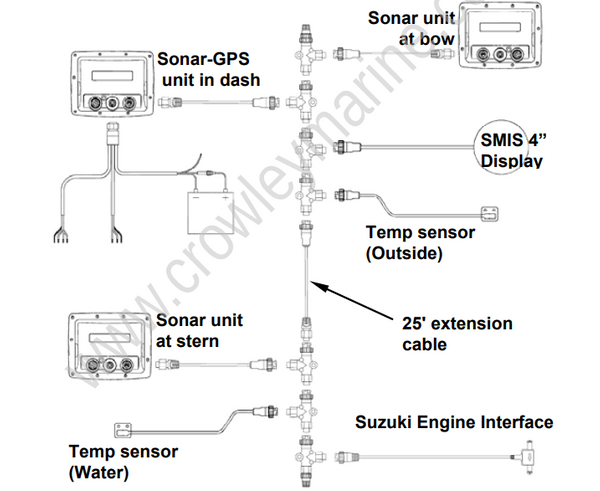 Every display unit, gauge or sensor attached to the network can communicate with all other devices on the network. Location, speed and temperature, however, are not the only kinds of information that can be shared.

Fuel Remaining data along with engine information like fuel efficiency are among a large number of data options that may be shared on the network.

Technically, any physical cable used to transfer network information is a network bus, but in our documentation we use this term to refer to the standard manufacturer installation appearing in new boats. This network bus is an installed and operational network cable running the length of your boat, already connected to a power supply and properly terminated. It will provide access to network nodes at various locations around your boat. 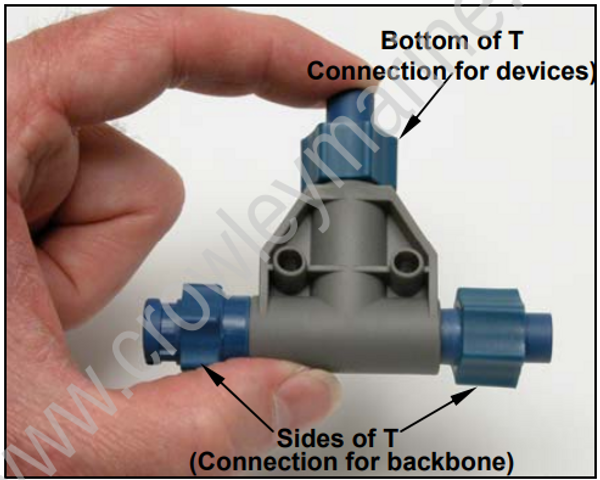 This T connector allows you to add a device to your NMEA 2000 bus creating a network node.

A network bus backbone consists of network cabling and T connectors. Network nodes are made by fitting T-shaped connectors into the backbone (using the sockets on the sides) and attaching any network device to the bottom of the T.

Staying with the previous phone wiring example, T connectors on the backbone are the equivalent of phone jacks spread throughout a house. To pick up a phone and be able to hear a conversation from another phone in the house, both phones have to be connected to the main phone line. In similar fashion, only sensors and display units plugged into the NMEA network can share information. The network backbone is like the phone wiring that runs throughout a home.

All T connectors on your boat's network probably will be connected to a device. If you want to add another node to a working network, add another T connector. T connectors may be purchased from your local Suzuki Marine Dealer. If you are adding any other sensors you will need to order a T connector for each one. 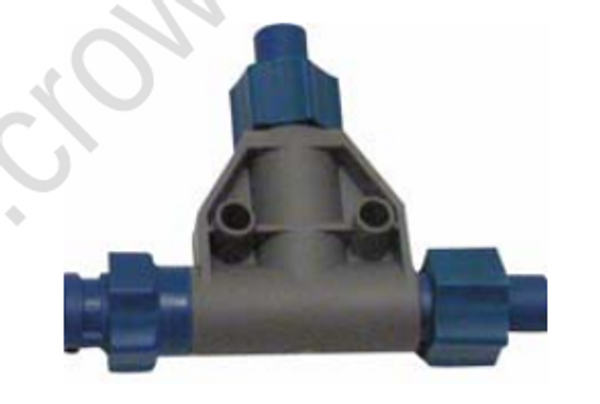 Shown above is a "hard" T connector, which is used for connecting devices in a NMEA 2000 network.

NMEA 2000 networks are constructed using a linear pattern. It is important linear architecture is maintained when the network is modified or a
node is added to the network.

Linear architecture refers to way the network's nodes are connected to the network backbone. Note that every T connector has one female socket and two male sockets. This means you could connect it in two different ways. Using linear construction, the nodes will be connected side by side, leaving the bottom of the T available for connection to a display unit or NMEA 2000 device, like the "Correct installation" figure on the bottom left. A network built following a linear construction is easier to maintain and expand. It also allows you to ensure the two terminators are at the ends of the backbone. If your installation does not follow a linear architecture, the network may not function. 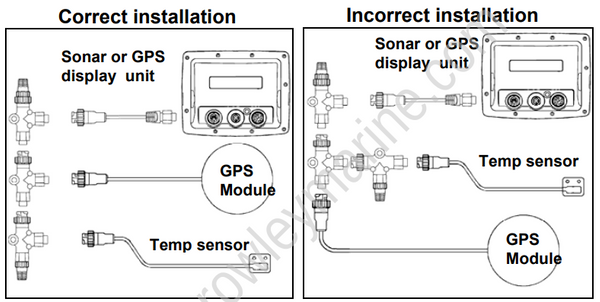 Both network designs in these images contain the same set of components. Both networks are terminated and all of connectors are able to be connected to one another, but the installation on the left comes to a clear end with terminators on each end of the backbone. The non-linear installation on the right has no clear end, increasing the chance of an installation error. It also makes network expansion more difficult and could even prevent the network from functioning.

Always maintain linear architecture when modifying your network. Make sure display units or sensors are attached to the bottom of the T. Attach the sides of the T to backbone extension cables, terminators or other T connectors – nothing else.

All network examples in this document show networks built with a linear architecture.

In this example, a new device is added to the NMEA 2000 bus by installing a T connector between a T connector and a terminator at the end of the backbone (network bus).

If you want to add a node at the end of the backbone (network bus) remove the terminator from the last connector, like the figure above. Install the new T connector, then attach the terminator to the side of the connector.

Suzuki Genuine Accessories provides SMIS extension cables in various lengths, giving you the flexibility to match node installation to the desired location on your boat. Every extension cable has a male connector on one end and a female connector on the other allowing you to insert it anywhere on the network where there is an existing connection.

For a NMEA 2000 network to operate, the bus must be connected to a switched power source (generally a switch on your boat's accessory panel). NMEA 2000 networks require 12 volts DC power regardless of the size of the network or the number of devices attached.

If your boat came with a NMEA 2000 bus installed, it should already be connected to a switched power source that draws from the boat's battery. To confirm how the bus was installed, consult your boat dealer or manufacturer.

Always use a switched power source for your NMEA 2000 bus. Do not connect the NMEA 2000 Power cable directly to your boat's battery. You need to be able to turn the network's power on and off.

Many of the devices on the NMEA 2000 bus are drawing current whenever the network has power. They do not have their own on/off switches. In order to preserve your battery, you need to make sure your NMEA bus power supply can easily be switched on and off. Most installations connect the NMEA power cable to a switch on the boat's accessory panel.

Never connect an additional power source to a NMEA 2000 bus that is already powered. A NMEA 2000 network should never be connected to more than one power source.

If you are attaching a GPS display unit and a GPS module to a NMEA 2000 bus that is already powered, make sure you DO NOT connect the display unit's NMEA 2000 Power cable to another power source. Cap unused power wires with wire nuts or electrical tape.

Several sonar or GPS display units can be connected to a single network. If you do, remember — only one power connection should provide power to the network. Even though all the display units on the network come with a NMEA 2000 Power cable you should only attach one of them. Cap the unused power wires with wire nuts or electrical tape.

Many manufacturer-installed networks use a Network Power cable. If your network already includes this power sources DO NOT connect the NMEA 2000 power cable of any of your GPS or sonar display units. Cap the unused power wires with wire nuts or electrical tape. 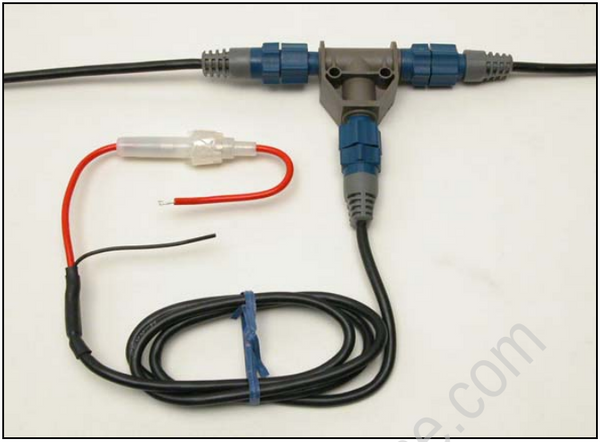 OEM factory installations typically use a Network Power Cable to supply power to the network bus. The red and black leads are connected to a switched power source, allowing the user to turn off power to the bus.

If you connect multiple power sources to a NMEA 2000 network you could cause severe damage to the network, attached devices and your boat!

The terminators provide resistance necessary for devices to communicate along the network. This communication takes the form of electrical pulses sent out by the device transmitting information. In order for the network to operate, you need 60-ohms of resistance to pull the network back to its recessive state after a signal, so the next pulse can be heard. Terminators (two 120-ohm terminators in parallel) are used to create this resistance. Attach one at each end of the backbone.

NEVER attach a terminator to an NMEA 2000 network bus that has already been terminated.

Setting up a Network

Suzuki Marine provides all the cables you will need to create a NMEA 2000 network and provides T connectors and extension cables so you can add devices along the backbone wherever you want. Once you have a working network, every sensor will need a T connector for easy expansion.

Adding a New Device to a Working Network Bus

Once your boat has a working NMEA 2000 bus, you no longer will have to be concerned about power or terminators or configuring cables. Install additional T connectors as described earlier and connect your SMIS devices to the network.

Another option for expanding a network would be adding a network node with a NMEA 2000 temp sensor & SMIS 4” Display. Then your sonarGPS display unit would provide the GPS signal from for speed readings and the temperature information from the temp sensor would all be displayed on the SMIS 4” display head unit..

You can continue expanding your network by adding new network nodes.

Connecting to a non-SMIS Network

Some boats will come with a manufacturer-installed NMEA 2000 network that does not use SMIS T connectors. Many of these networks will use the DeviceNet Micro T connector shown in the following image. 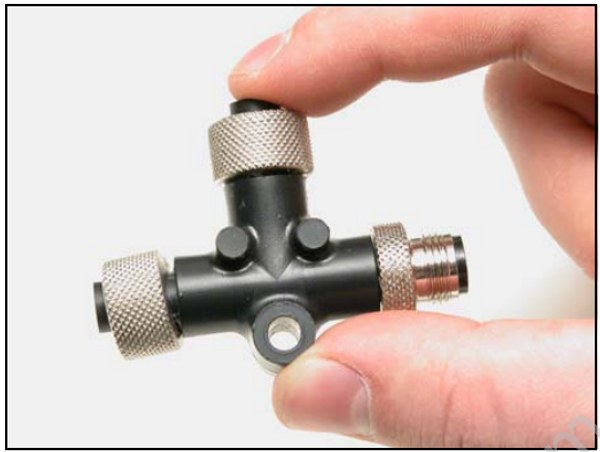 The Micro-C T connector used in some NMEA-2000 buses.

For your convenience Suzuki Genuine Accessories offers a Bus Adapter Cable (below) to connect SMIS products to Micro-C T connectors.

With this adapter cable, you can connect the Micro-C plug (left end of cable) to an available network node on your boat's NMEA 2000 bus. The SMIS plug (right end of cable) connects to a SMIS display unit or NMEA 2000/SMIS sensor.

NMEA 2000 devices WILL NOT communicate with NMEA 0183 devices.

In order to prevent something similar happening again, NMEA adopted a new standard, NMEA 2000, a radical departure from the old NMEA 0183. NMEA 2000 was planned to be a consistent system capable of incorporating future growth.

One of the major benefits of NMEA 2000 is the connection to engines capable of reporting detailed operation information along the network.