These instructions will alter you to certain things you should do very carefully. If you don't, you could...

appears next to information important to keep machinery from being damaged.

The important safeguards and instructions appearing in these directions cannot cover all possible conditions or situations that occur. The person following these directions must use common sense, caution and care.

When reference is made to brand name, product or specific tool, an equivalent product may be used in place of the referred to product. Substitute products used must have equivalent characteristics, including type, strength, and material. Incorrect substitution may result in product malfunction and possible injury to the operator and/or passengers.

All photographs and illustrations used may not necessarily depict actual models or equipment, but are intended only for reference. Specifications used are based on the latest product information available at the time of publication.

These instructions are intended for use by an authorized Evinrude® or Johnson® dealer's service technician. The installation of this kit includes procedures best performed by a qualified service technician with service literature and special tools.

This kit adds 35 amp charging capability to CC and later 120 and 140 models, and may also be used on 125 WTP electric start commercial models.

The flywheel in this kit does not have a rope groove for an emergency starting rope. It will not be possible to rope start this motor after this kit is installed.

: Read complete installation instructions prior to starting work. This kit should be installed by a trained service technician using current technical literature. These instructions are not intended for consumer use. Inform the owner to make note in his Owner's Manual that he will be longer have the ability to emergency rope start this engine.

Give these installation instructions to the owner. They contain information vital to the continued safe use of the product.

To the New Owner

Retain these instructions with your Owner's Manual. They contain installation information for reference. 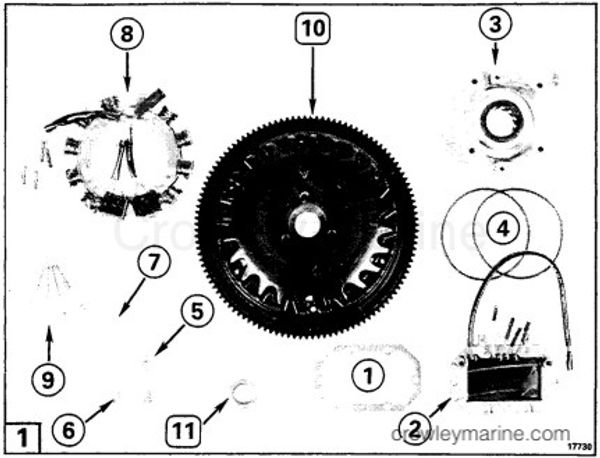 [1] Check contents of kit to become familiar with new parts to be installed.

[3]
Lift the powerpack up and take note of the position of the various connectors and electrical wires.

[6]
!NOTE! Remove all of the gasket and sealant from the block surface. Do not let any gasket material fall into the water passage. 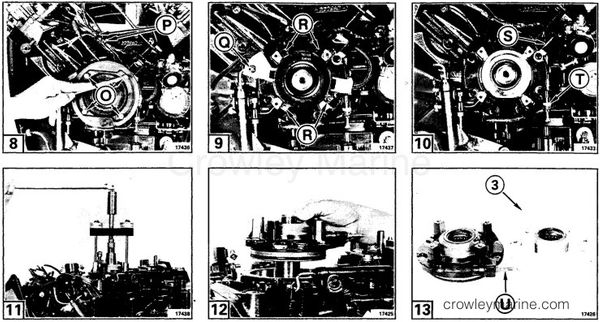 [9]
Push throttle connector (Q) out of timer base arm. Remove four timer base screws and retainers (R). Lift timer base off motor.

[13]
Remove the timing adjustment screw (U) from the old bearing assembly and install in the new assembly (3). 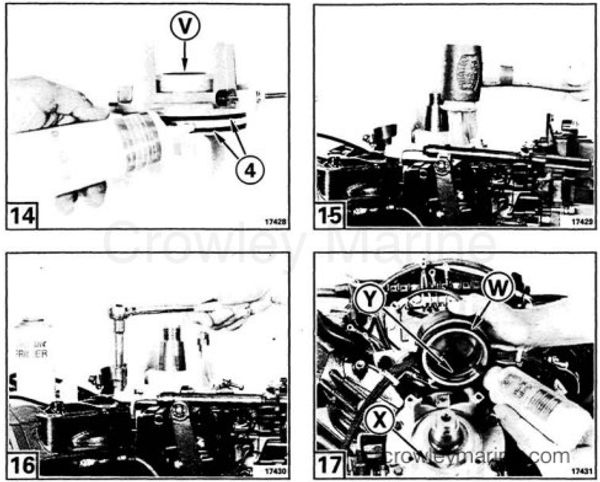 [16]
Apply Locquic Primer and Nut Lock to the screws. Install the screws with the cable clamp and stop screw as they were when removed. Tighten screws evenly, and torque to 72-96 in. lbs. (8-11 Nm).

[19]
Place new stator assembly (8) on bearing housing with leads behind retainer (A).

[20]
Reinstall the electrical bracket on the motor with the two double-end screws in the rear bracket holes (E). All of the wires tie-strapped together are routed under the middle of the bracket. Tighten the tie strap securely.

[21]
Connect the stator, rectifier/regulator, and wiring harness wires to the terminal board. Follow the wiring diagram on the back of the electrical bracket. Note that only one red wire (F) will be attached to the red terminal. Lift the powerpack up to connect the orange and orange/black wires. 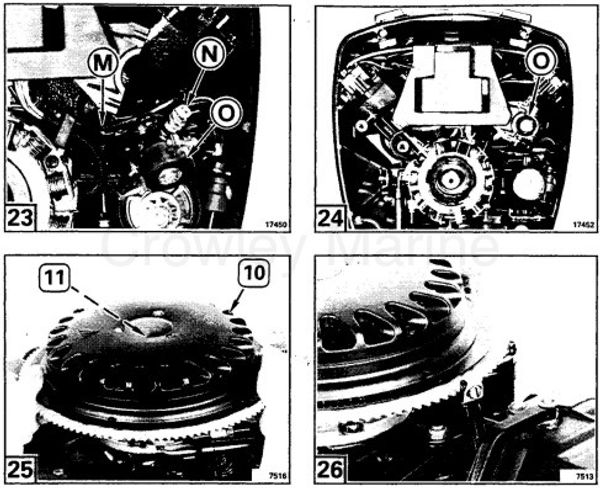 See Section 1. General Information - Synchronization and Linkage Adjustments in the Service Manual for timing pointer adjustments, throttle plate synchronization, cam pick-up, wide-open-throttle stop, maximum spark advance, and idle timing. All of these steps MUST be completed when any major electrical components has been replaced.

The new charging system may now be tested for output. A load bank tester or a carbon pile tester, either capable of drawing at least 35 amps, must be used for this test. See Section 7. Electrical System - Running Test, Alternator Output and Rectifier/Regulator Tests in the Service Manual.

Run the engine with Test Wheel, P/N 387388. Do not run the engine with a propeller or flushing adapter for this test. Engine should be secured in test tank or mounted on boat, tied securely to dock while test is performed.