All pistons burn fuel to release energy in the form of heat and pressure.
The pressure that is created by the air fuel ignition moves the piston back and forth in a cylinder which moves the connecting rod and causes the crankshaft to rotate.

4 stroke engines may use a carburetor, which mixes air and fuel at a proper ratio.
The newer 4 strokes engines however use fuel injectors instead of carburetors.
Usually every cylinder has its own fuel injector and are generally positioned near the intake valve. 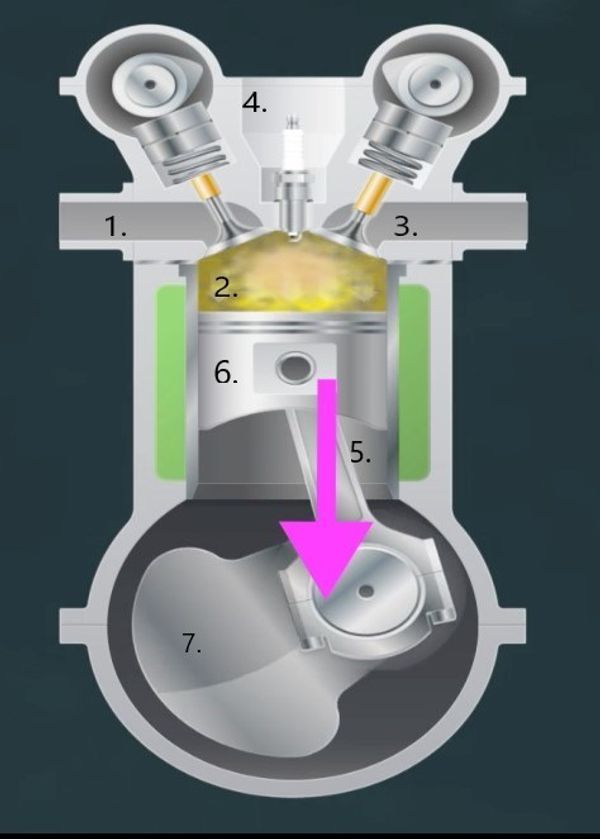 Unlike the 4 stroke engine, Reed valves are utilized for this engine. These Reed valves have the ability to flex allowing the air-fuel mixture in but not out.

Each cylinder of a 2 stroke engine has its own separate crankcase where the crankshaft rotates.

Each cylinder´s crankcase is sealed from the atmosphere as well as other cylinders and crankcases. Unlike the 4 strokes the 2 stroke once its pistons make their movement upward within the cylinder creates a vacuum at the bottom of the crankcase which draws the air-fuel mixture through the carburetor past the Reed valve and into the crankshaft. 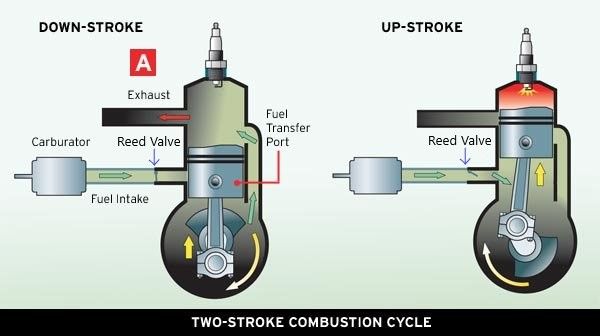 Scavenging is the process of pushing exhausted gas charge out of the cylinder and drawing in a fresh draught of air or fuel/air mixture for the next cycle. This process is essential in having a smooth-running internal combustion engine.

-The loop-scavenged engine, or loop-charged as it´s often called, has its intake ports spread around the cylinder bore. The passages into the intake ports are contoured to direct the incoming charge to the top and center of the cylinder

The biggest difference between the two are that they direct the flow of the incoming charge differently.

One more crucial difference between the four-stroke and two-stroke engines is lubrication. Most four-strokes use a pressurized oil system where the oil gets delivered all through the engine unlike the 2 stroke engine, where you can't use the crankcase for lubrication, since it's busy pumping air and fuel to the cylinders. So to be able to go around this predicament is to mix your fuel with your oil at the correct ratio. 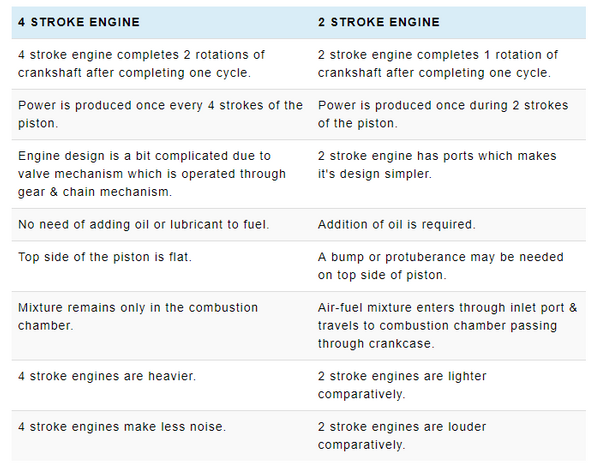 Most four-stroke engines use a pressurized oil system with a pump to distribute oil to internal components.

A two-stroke engine power cycle consists of two strokes of the piston in one revolution of the crankshaft. The upward stroke of the piston:
• Draws a fresh fuel/air mixture through the reed valves into the crankcase.
• Closes the intake and exhaust ports.
• Compresses the trapped fuel/air mixture in the cylinder.

Late model Evinrude® outboards use direct injection.
Many two-stroke engines require oil to be mixed with the fuel to lubricate internal components.

Click on the link below to complete a quiz to test your knowledge!