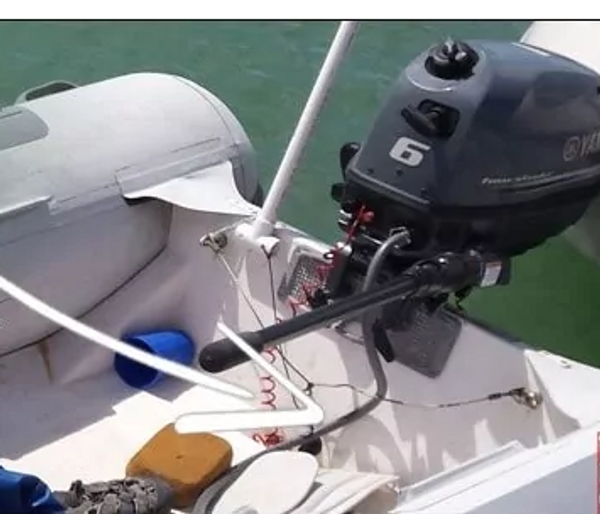 Outboard fuel line may be used to connect to a metal thru-hull fitting in the splash well or to a portable fuel tank. If the hose is connected to anything other than a splash well fitting or a portable tank, it is considered part of the boat´s fuel system and Coast Guard regulations must be followed.

Many outboards have a quick-disconnect feature that allows the fuel line to be seperated from the motor. The hose end of a "quick disconnect" connector includes an o-ring. If the o-ring is cracked or worn, fuel can leak from the connector or air can enter the fuel system. 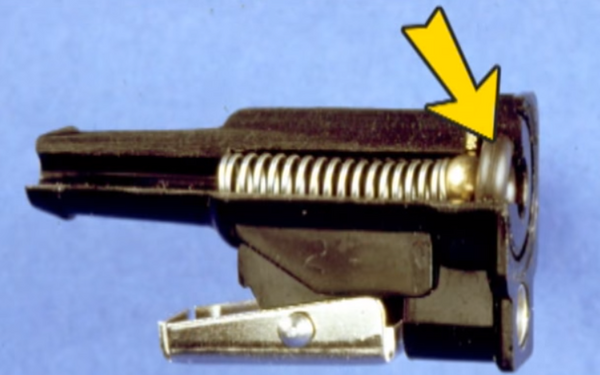 Some smaller outboards use "dripless" fuel line connectors, it has a valve that opens when the hose connector is attached. Fuel flow will be restricted if the valve doesn´t open completely.

Always inspect all hoses and connectors. Stiff, cracked, worn, and damaged hoses must be replaced.

A diaphragm-type fuel pump is mounted on the outboard´s powerhead. It draws fuel from the boat´s fuel system and delivers it to the carburetor or fuel injection system. 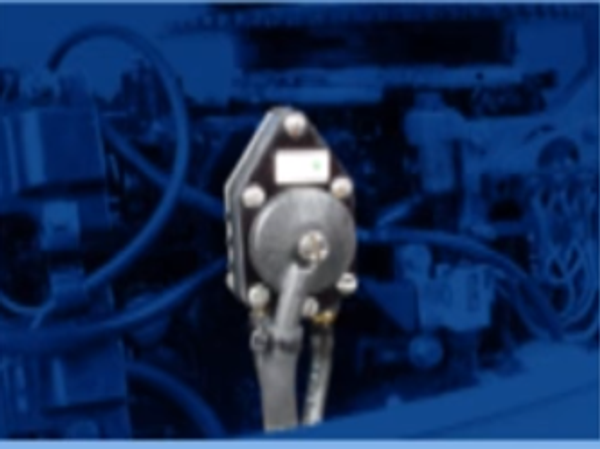 Most 40hp and larger, carbureted two-stroke outboards use a combination fuel/oil pump mounted on the engine. The pump draws oil from an oil reservoir - mounted inside the boat - and fuel from the fuel tank. The pump injects oil into the fuel and pumps the mixture to the carburetors.

Early versions were called VRO, for Variable Ratio Oiling, because they varied the oil ratio depending on engine speed and load. Later versions added oil at a constant ratio and were called OMS pumps, for Oil Metering System.

The Fuel/Oil Pump is Divided into Four Sections: 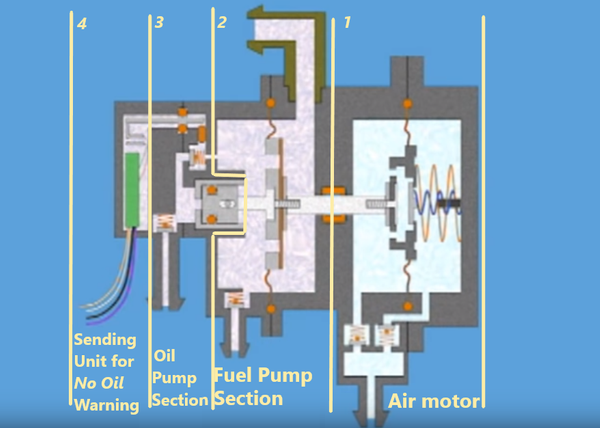 Four Sections of a Fuel/Oil Pump

Be sure to inspect the remote oil tank on every oil-injected outboard you service. Any water, gas, or other contaminants must be removed before using the outboard.
If the tank contains water, consider mounting it in a drier location. If necessary, the oil tank can be installed in a battery box.

Gasoline in the oil tank might be the result of operator error. However, it could also indicate a problem with the pump. The hose connecting the remote oil tank to the pump needs to be primed during initial engine installation, and after any repair to the injection system. With the oil hose disconnected from the engine, pump the primer bulb on the oil hose. Hold the hose end up so all the air rises to the top of the hose. Catch oil from the hose in a container. Continue pumping the primer bulb until all of the air is purged from the hose. Reconnect the hose. Pump the bulb 2 or 3 more times. See illustration below. 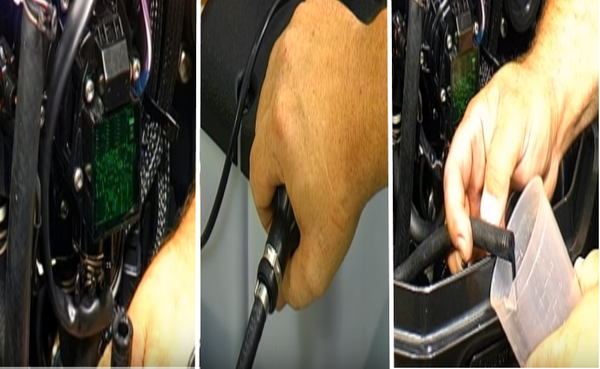 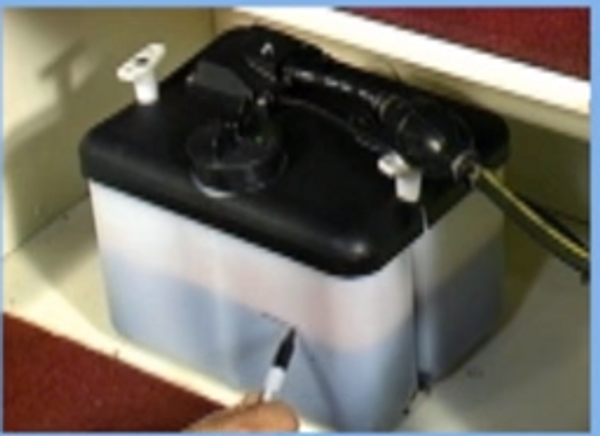 Marking the oil level on the tank is a good way to verify the oil is being consumed.

You can verify that fuel pump pressure and the fuel/oil ratio are correct by performing simple tests described in the service manual. Problems with the boat fuel system often cause low fuel pump pressure, and poor performance.

The following procedures for testing the boat´s fuel system are described in the service manual. The outboard must be under load during testing. A flushing device alone does not provide a load. Use a dynamometer, test tank, or launch the boat.
Install the vacuum gauge and clear line into the fuel delivery hose.
Start the outboard.
Advance the throttle.
Observe the clear hose and vacuum gauge. 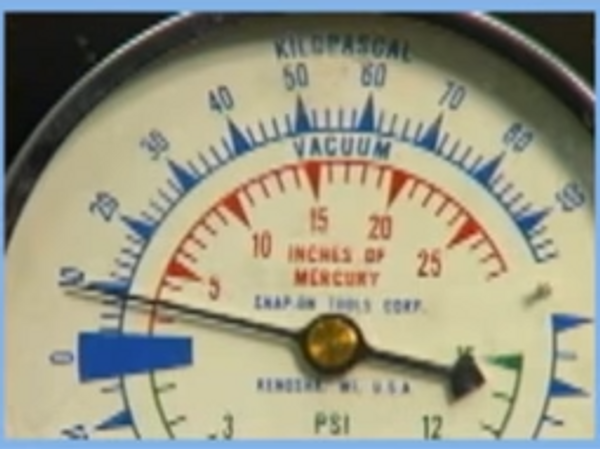 A good fuel delivery system will read below 4 inches of mercury on the gauge at all times- and air bubbles will not show in the clear line. A high vacuum reading indicates a fuel restriction.

Restrictions can be caused by kinked hoses; fittings that are too small; stuck or poor quality anti-siphon valves; or debris on the fuel tank pick-up´s strainer screen. Large air bubbles in the clear hose indicate an air leak in the fuel system. Because fuel may not leak out at the point where air leaks into the system, carefully check all of the fuel system´s fittings, connectors, and hoses. Be aware that some small bubbles could also be vapor being drawn out of the fuel, especially if the fuel is warm and the vacuum is approaching 4 inches.

A damaged pick-up tube in the fuel tank could also be the source of an air leak. This may not cause a problem when the tank is full. However, when the fuel level is at or below the crack, air will enter the fuel system. A vacuum switch is used in many carbureted V6 models to warn the operator of a fuel restriction. The switch is connected between the fuel supply and the fuel pump, like the vacuum gauge on the boat fuel system test. A restriction in the fuel system will cause a partial vacuum in the fuel line and turn on the switch. The vacuum switch will activate at approximately 6 inches mercury- well above the limit of 4 inches mercury. A partially restricted fuel system usually supplies enough fuel to operate the outboard at slow speeds- so the vacuum switch will not normally activate the warning system at idle. But when the engine is running at high RPM, and fuel demand is at its highest, a restriction in the system will limit the amount of fuel flow. When the vacuum is strong enough, the vacuum switch closes and the warning system activates.

Most 40 HP and larger outboards use an in-line fuel filter. When servicing an outboard, inspect the filter for clogged screens, loose fittings, and other damage that could create a leak, a restrict fuel flow. Be sure to service the in-line filter annually or every 100 hours of engine operation, whichever comes first.

The primer solenoid- an electrically operated valve- provides additional fuel to make starting a cold engine easier. Pushing in on the key switch opens the valve, allowing the fuel pump to force additional fuel through the valve into the engine. 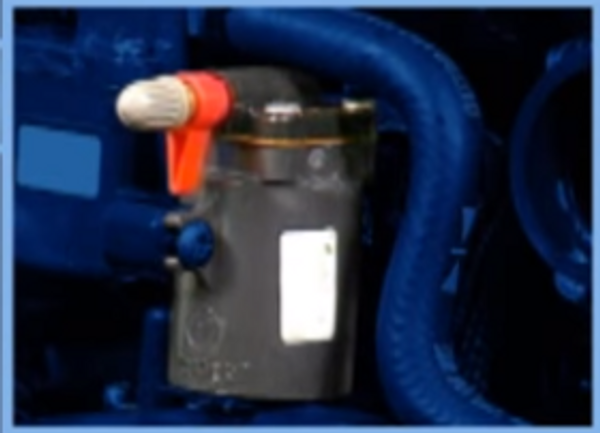 Pushing the key switch in causes current to flow through the windings of the primer solenoid. This creates a magnetic field that moves the plunger and opens the valve, allowing pressurized fuel to flow through the primer. Turning the red primer knob to the ON position will also open the valve. The knob is used only in case of an electrical failure. Under normal operating conditions the primer knob should be in the OFF position. Turning the primer knob to the OFF position will close the valve. Spring tension keeps the plunger valve against its seat. 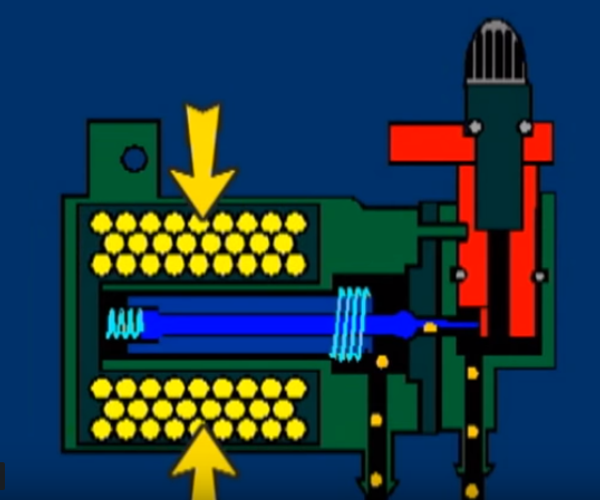 Windings of the Primer Solenoid 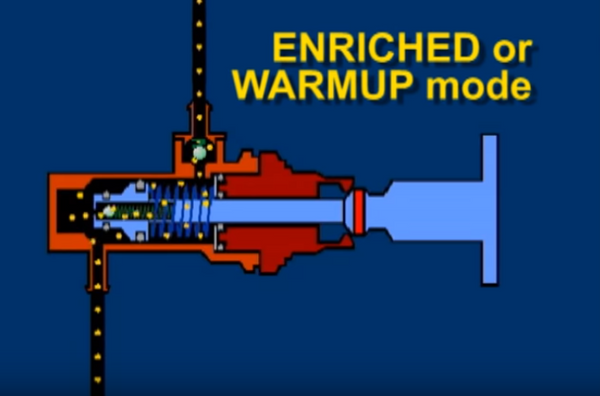 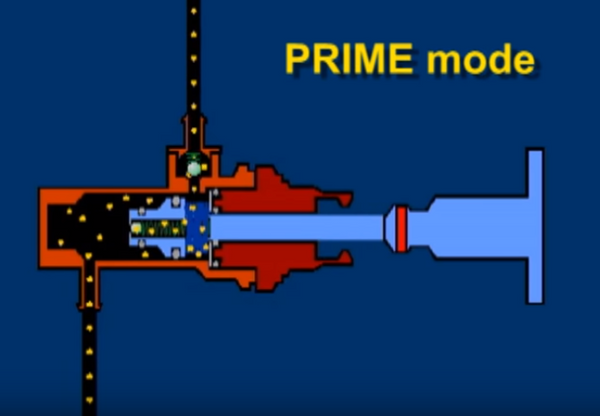 The recirculation system is an important part of the two-stroke powerhead. When the outboard is running some fuel and oil will settle out of the air/fuel mixture and cling to internal powerhead parts.

This is especially true when the powerhead is cold. Recirculation systems pick up this puddled fuel/oil mix and redistribute it in the powerhead. The recirculation system consists of check valves, fittings, hoses and internal passages. The fuel system is designed and calibrated with these systems working. If the system is not working properly, fuel may accumulate in the crankcase, and cause a cylinder to run rich. Since a diffrent cylinder normally burns these fluids, that cylinder could run lean.

A good understanding of fuel system components, theory of operation, and maintenance procedures will help you to quickly troubleshoot and repair fuel system problems, and keep your customers having fun in the water.

Fuel hoses are safety related, so always inspect the hoses and connectors on every outboard
you service. Stiff, cracked, worn, and damaged hoses must be replaced.
Special materials are used for fuel hoses. When replacing hoses, use only the correct part as
indicated in the parts catalog.

A boat’s fuel system must be capable of providing adequate fuel flow to the outboard. A restriction
in fuel flow can damage the powerhead.
When testing a fuel system, a high vacuum reading indicates a restriction. Bubbles and a low
vacuum reading indicate air leaking into the system. If you have high vacuum and bubbles, look
for and correct any restriction. The bubbles are most likely caused by vapor forming due to the
low pressure.

Diaphragm-type fuel pumps are used on many two-stroke and four-stroke models. On twostroke
models, pressure and vacuum pulses from the outboard’s crankcase drive the fuel pump.
On four-stroke models, a lobe on the crankshaft or camshaft drives the fuel pump.
Some older 40 HP and larger, two-stroke outboards used a combination fuel/oil pump that
injects oil into the fuel. This pump is divided into four sections:

After servicing a combination fuel/oil pump, make sure to mix oil with the fuel at a 50:1 ratio until
you can verify the oil injection system is operating.
BRP offers three oils that exceed the TCW3 specification:
• Good XD30
• Better XD50
• Best XD100

Additional fuel to make starting a cold engine easier is supplied by either a primer or a choke.
Primers may be manually or electrically operated.
The recirculation system is an important part of the two-stroke powerhead. When the outboard
is running some fuel and oil will settle out of the air/fuel mixture and cling to internal powerhead
parts. This is especially true when the powerhead is cold.

Test your knowledge by completing the quiz below!