What Goes Into an Outboard?

At the front of the powerhead is the air lencer. Behind the air silencer are the carburetors if the outboard has them. On fuel injected models, air enters the powerhead through one or more throttle bodies.

The exhaust housing is the largest component of the midsection. It contains cooling and exhaust passages. Stern brackets are used to mount the outboard to the boat. Many models have a power trim and tilt unit mounted between the stern brackets.

Rubber mounts help to dampen vibration from the outboard so it is not transmitted to the boat.

The gearcase contains water intakes to supply water for the outboard's cooling system. This part of the gearcase housing is called the anti-ventilation plate. It helps prevent air from being drawn into the path of the propeller causing it to lose thrust. At the bottom of the gearcase is the skeg. The skeg helps protect the propeller from damage due to striking an underwater object. It also enhances the ability to steer the boat. 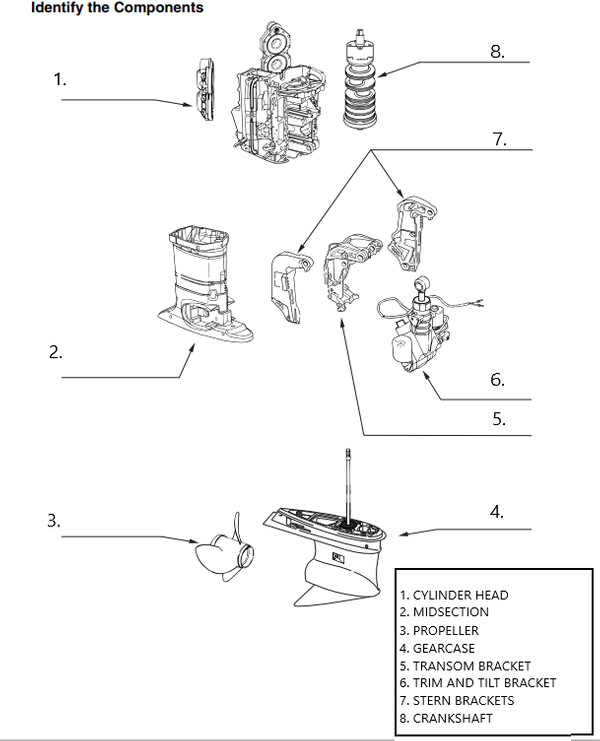 Powerhead:
The flywheel which is located on top of the Powerhead develops momentum which is then used for keeping the internal powerhead components moving smoothly between power strokes

Mid Section :
Exhaust housing is the largest component of the midsection.
The steering arm assembly rotates in the swivel bracket.
The driveshaft passes power from crankshaft to the gear case

Gear Case:
Is attached to the bottom of the mid section
Converts the vertical rotation from the crankshaft to a horizontal rotation for the propeller
A skeg protects the propeller from underwater objects and enhances the ability to steer the boat better

Click on the link below to complete a quiz to test your knowledge!